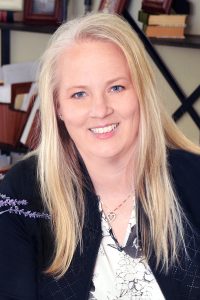 April Spurgeon was born and raised in southwest Oklahoma City just a few miles from where she now practices law and still resides with her husband and three daughters.

April taught high school at Northwest Classen High School in the Oklahoma City Public School district and also at Norman High School. She then taught for the University of Oklahoma at the U.S. Postal Service’s National Center for Employee Development before going to work for her family’s trucking and transportation company.

While working in trucking and transportation April worked closely with multiple attorneys in representing the company. She was involved in a broad range of cases including vehicle accident cases, worker’s compensation cases, and employment cases. This work with the law inspired April to attend law school.

April began attending Oklahoma City University’s School of Law in 2013. While attending law school April continued working for her family’s business and raising her three daughters. During her time at OCU’s School of Law April was on the Dean’s List, she was a Merit Scholar, and she was also a member of the William J. Holloway, Jr. American Inn of Court.